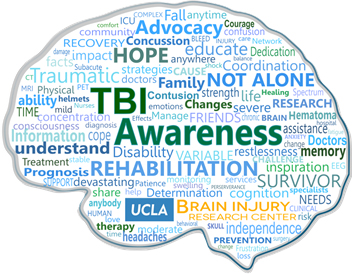 an awareness fair, a congressional briefing, and a reception to celebrate on Capitol Hill.

National Traumatic Brain Injury Awareness Month educates us that the most common form of head injury is called mild traumatic brain injury, or “concussion.” Concussions don’t happen just from sports, and they don’t just happen to young adults. Concussions frequently happen to the aging population from falls, and are often overlooked.

Brain injuries also commonly occur after car accidents, violent shaking of the head, being hit by falling objects, or from any other trauma to the skull. It’s important to realize that this type fo injury doesn’t necessarily depend on how hard the blow to the head was, and in around 90% of the cases, it does not result in a loss of consciousness.

Other than causing disabilities, traumatic brain injuries are also a leading cause of seizure disorders.

I did not realize how many people suffer from traumatic brain injuries, or how common they could be. Here are some additional facts and stats about brain injuries:

A traumatic brain injury can look different in everyone, depending on the severity of the injury. Lasting impairments can occur to memory, cognitive functioning, movement, sensation, or emotional functioning – even including personality changes or depression.

A TBI will not only have lasting effects on the individual; it also impacts their families and communities. Take any steps you can to prevent injury from occurring, and spread awareness all March long.